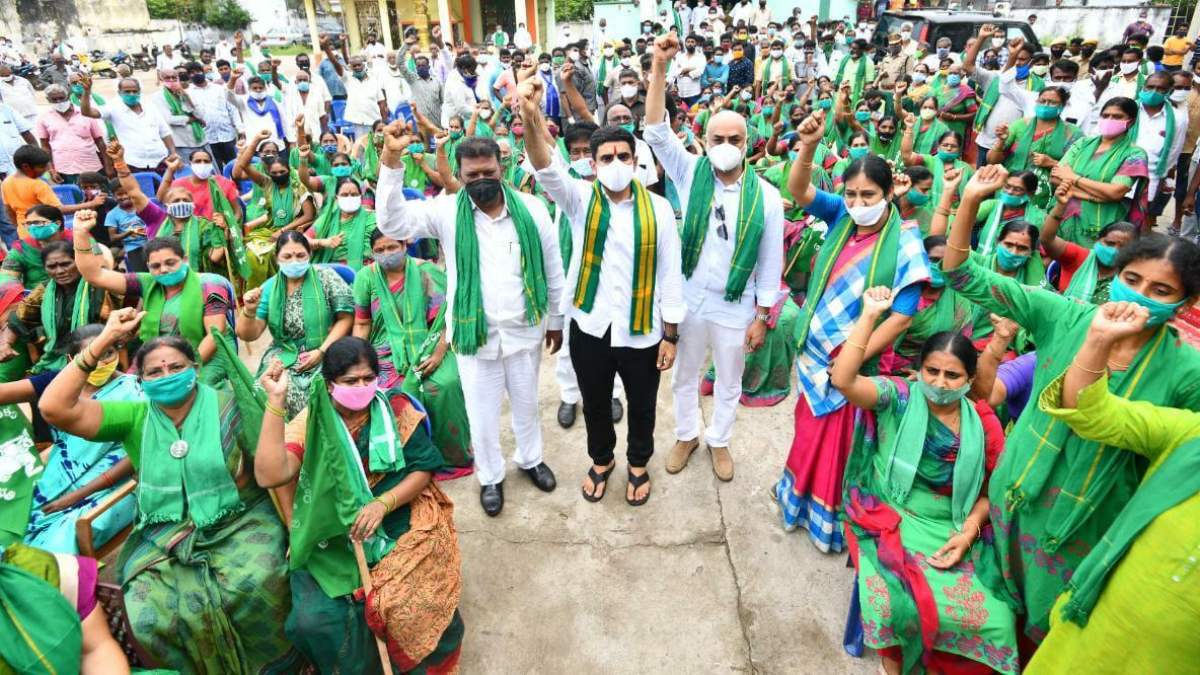 On the 300 days completion of Amaravati agitation, TDP National General Secretary and former Minister Nara Lokesh on Monday visited the protest camps of farmers, rythu coolies and women in the Capital city villages and he asserted the TDP’s solidarity to their justified demand for ‘One State, One Capital’.

Mr. Lokesh accused Chief Minister YS Jaganmohan Reddy of trying to kill the ‘baby capital’ of Andhra Pradesh in utter disregard for the rights and sacrifices of farmers who gave away 34,000 acres in response to a call given by the then Chief Minister N Chandrababu Naidu. Amaravati was selected at that time as per the wishes of all people of the State. Even Jagan Reddy spoke in favour of Amaravati selection on the floor of the Assembly in his capacity as Opposition Leader at that time.

Addressing protesters at Penumaka, Mr. Nara Lokesh said it was Jaganmohan Reddy who in fact demanded an equi-distant new Capital to North Andhra and Rayalaseema in over 30,000 acres where there would be no water shortage. Amaravati had met all these parameters. But, Mr Jagan Reddy, who approved Amaravati while in Opposition and even made people believe in that stand, had completely changed his stance and started shifting Capital after coming to power. A ruler would show greater responsibility while in power but here this CM was displaying an erosion of that responsibility.

Mr. Lokesh strongly objected to the ruling YCP Ministers and MLAs talking disrespectfully and even insulting the farmers and women in a clear indication of their dangerous adamant attitude. The ruling party leaders who eat food cultivated in farmers’ fields for three times a day, were now belittling and browbeating the same farmers. As a result of the Government’s thoughtless policies, women had to come out on to the roads and take part in protests for the last 300 days. One YCP MLA dared to call Amaravati farmers real estate brokers unmindful of the sacrifices they made for the sake of 5 crore people of the State.

Mr. Nara Lokesh also visited and addressed agitators at Yerrabalem, Krishnayapalem and other villages in Amaravati Capital area. He was accompanied by Guntur MP Galla Jayadev, Tadikonda former MLA T Sravan Kumar and other leaders.
Mr. Lokesh lauded the farmers, rythu coolies, women and youth for courageously continuing their agitation for the last 300 days despite facing persecution in the form of false arrests, fabricated cases, lathicharge and humiliation meted out by the ruling YCP leaders. Only a person having a good heart can understand the sweat and toil of farmers but not one who is adamant and arrogant. Amaravati agitation is literally a battle against a psycho, a factionist and an obstinated person all rolled into one.

Stating that CM Jagan was incapable of bringing development, Mr. Lokesh pointed out that not a single industry came up even in Visakhapatnam and North Andhra, leave alone the rest of the State in the past 17 months. What more, the port city had become witness to unchecked land grabs and private settlements with law and order having deteriorated completely and hopelessly.