After a thirty-second video clip went viral of Mika Singh singing at an event in Pakistan, AICWA, FWICE has banned Mika Singh aka Amrik Singh. Tensions between the two neighboring countries are palpable and Mika Singh took a decision to sing at an event for the greed of money.

Mika Singh who for the greed of money, sung at an event in Pakistan for former president Pervez Musharraf’s cousin daughter in Karachi has now been banned from both India and Pakistan irrevocably forever. The whole controversy started when a Pakistani journalist tweeted a thirty-second clip of Mika Singh singing in Karachi. After the Article 370 revocations, the cultural ties between India and Pakistan have been severed but even after the decision, Mika Singh chose to perform in Pakistan because of which the association has banned Mika Singh for the greed of money.

Federation Of Western Inda Cine Employees (FWICE) issued a statement today where they stated deeply pained and anguished by singer Mika Singh aka Amrik Singh, who performed at the wedding of the former president of Pakistan Pervez Mushraaf’s cousin daughter in Karachi. Followed the tension between two neighboring countries, Mika Singh has done something shocking, shameful and shattering. And we don’t allow such decisions so Mika Singh is irrevocably banned from Indian industry.

The cultural bridge between India and Pakistan is severed, and his performance against the laws sends shivers down the spine of every Indian. Mika Singh chose Pakistan over India, money over nationalism, so it indicates his non-application of mind and traumatic intentions. We at FWICE have zero tolerance for such anti-nationalist acts and we condemn the act of such unpatriotic and ghastly decisions. Mika Singh alias Amrik Singh and his 14 crew members who participated in the performance are now banned in India from recording, playback singing and acting. 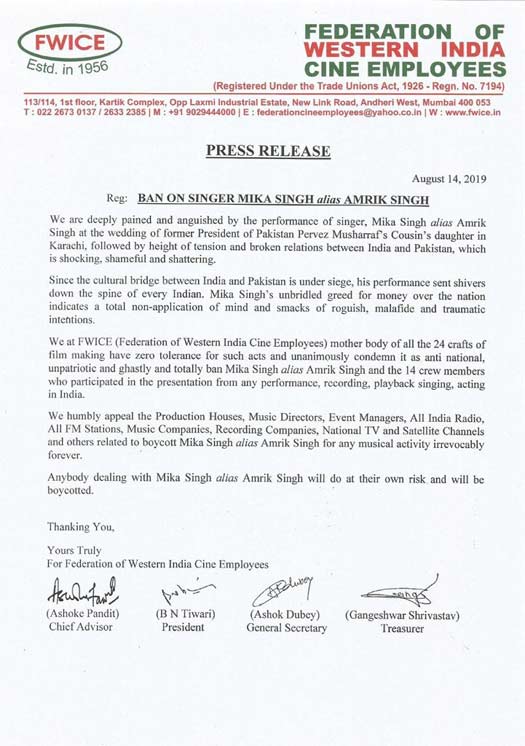 Happy that Indian singer Mika Singh performed at the mehndi of Gen Musharraf's relative recently in Karachi. God for bid if it was Nawaz Sharif's relative it would be raining ghadari k hashtag already. pic.twitter.com/IVfE5hETiz

For all the latest Entertainment News, download NewsX App

Dream Girl: Nushrat Bharucha says she was rejected for Slumdog Millionaire for being too good looking

Ranbir Kapoor to collaborate with Kabir Singh director Sandeep Vanga for his next crime-drama?