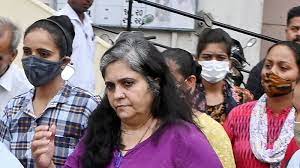 The Gujarat ATS-led (Anti-Terror Squad) case involves accusations of “conspiracy and fabrication of evidence” in relation to the 2002 riots, and activist Teesta Setalvad has petitioned the Supreme Court for an urgent hearing on a bail appeal.

Gujarat ATS has alleged that the 60-year-old falsified material records and evidence with the objective of implicating state functionaries in the 2002 mob violence case.

Teesta’s lawyer Aparna Bhat made the request for an urgent listing of the case before the Chief Justice of India on August 16. The matter has since been scheduled for a second hearing on August 22 where it will be heard by a bench under the direction of Justice Uday Umesh Lalit.

Teesta and Sreekumar were detained on June 25 in Mumbai by the Gujarat Police’s Ahmedabad crime department on accusations of fabricating innocent government officers in the 2002 riots. Sreekumar was Additional Director General Police of Gujarat during the riots.

According to Gujarat Police, they were detained owing to falsely implicating grave allegations against innocent individuals with offences punishable with the death penalty.

They have been charged sections 468 (forgery for purpose of cheating), 471 (forgery), 194 (giving or fabricating false evidence with intent to procure conviction of capital offence), 211 (institute criminal proceedings to cause injury), 218 (public servant framing incorrect record or writing with intent to save a person from punishment or property from forfeiture), and 120(B) (criminal conspiracy) of the Indian Penal Code.

Teesta and Sreekumar, told the court that no case was made against them under any section of the IPC.