Chandrayaan-2 launch LIVE updates: With the success of Chandrayaan-2 mission, India will become the fourth country in the world after the US, Russia and China to town down on the surface of the moon. The rocket nicknamed Bahubali (GSLV Mk III) will transport the satellite. It was launched at 2:43 pm from Sriharikota in Andhra Pradesh. It will be India's second attempt to launch the mission.

Chandrayaan-2: The Indian Space Research Organisation (ISRO) on Monday launched Chandrayaan-2 at 14:43 hrs IST from Satish Dhawan Space Center at Sriharikota on-board GSLV Mk-III seven days after it was called off due to a technical glitch 1 hour before the mission was set to take off. Isro’swork horse GSLV Mk-III rocket (Bahubali) achieved a speed of 1626.876km per hour after takeoff. The S200 boosters rockets were separated at 61.995 km altitude. The vehicle weighs 3,84,400 kgs. It carries a payload of 3,877 kgs.

The spacecraft will be injected into an earth parking 170 x 39120 km orbit. The Rs 978-crore moon mission was launched from Sriharikota in Andhra Pradesh. The country is set to become the fourth nation to town down on the lunar surface of the moon after the US, China and China. The ISRO in a Twitter post said that the launch countdown of Geosynchronous Satellite Launch Vehicle-Mark 3 (GSLV Mk III), Chandrayaan-2 commenced on Sunday at 6:43 pm and the launch is scheduled at 2:43 pm.

ISRO completed the launch rehearsal on Saturday, July 20, two days before the actual take-off day. The satellite weighs around 2,379 kg with a capability to generate power of up to 1000W.

A series of manoeuvres will be carried out to raise its orbit and put Chandrayaan-2 on Lunar Transfer Trajectory. On entering Moon’s sphere of influence, on-board thrusters will slow down the spacecraft for Lunar Capture. The spacecraft will take 48 days to land on Moon’s surface. The Orbit of Chandrayaan-2 around the moon will be circularized to 100×100 km orbit through a series of orbital manoeuvres. On the day of landing, the lander will separate from the Orbiter and then perform a series of complex manoeuvres comprising of rough braking and fine braking. Imaging of the landing site region prior to landing will be done for finding safe and hazard-free zones. The lander-Vikram will finally land near the South Pole of the moon on Sep 7, 2019. Subsequently, Rover will roll out and carry out experiments on Lunar surface for a period of 1 Lunar day which is equal to 14 Earth days. The orbiter will continue its mission for a duration of one year.

India’s space agency will be intending to move towards the moon on August 14. The moon lander — Vikram-2 will land on the moon around September 6. Earlier, the ISRO had started the online registration process for those who wanted to witness the launch from the viewer’s gallery at Satish Dhawan Space Centre SHAR.

— Chandrayaan-2 which means moon-craft in Sanskrit is heading towards the south side of the Moon. This is a site where no mission has gone before and possibly the part with water presence. So far, Moon landings have been in areas close to its equator as it receives more sunlight which is required for solar-powered instruments.

— Ahead of Chandrayaan’s lift-off, ISRO enlightens people across the country with the distance of Moon from Earth. It said the average distance is 3, 84, 000 km and that Vikram lander will land on Moon on the 48th day of the mission, which begins today.

— Chandrayaan-2 will orbit around the moon at an approximate altitude of 100 km. This mission is significant for India as, after the success of the mission, the country will become fourth space power after Russia, the US and China. The success rate to send a spacecraft to the moon is 52 per cent. So far, only 38 soft landings have been made on the lunar surface.

— The 20-hour countdown began on Sunday at 6:43 in the evening. The process is still underway after the filling of UH-25 fuel was complete. The GSLV MARK-III rocket. termed as Baahubali or Fat Boy, is a 644-tonne rocket and 44 meters long. The Baahubali is capable of lifting a mass of 3877 kg. 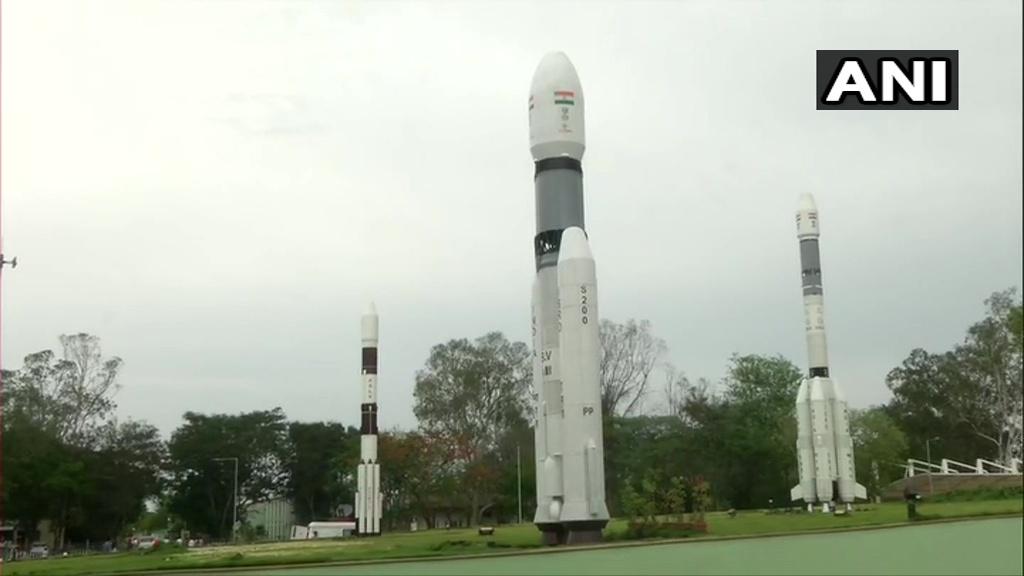