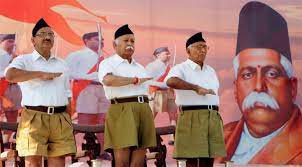 The RSS changed its social media profile pictures to the National Flag on Friday, in response to the call of Prime Minister Modi ahead of India’s 75th Independence Day.

As the country is celebrating the ‘Azadi Ka Amrit Mahotsav’ to mark 75 years of India’s independence, Prime Minister Narendra Modi has appealed to people to put the ‘Tiranga’ as the profile picture of their social media accounts between August 2 and 15.

The RSS was previously criticized by politicians over social media photos when Congress blamed the RSS for failing to respond to PM Modi’s appeal due to its ‘opposition to India’s National Flag for 52 years’.

Congress leader Rahul Gandhi slammed the RSS, saying those shouting ‘Har Ghar Tiranga’ chants today are from the ‘anti-national’ organisation that refused to raise the tricolor for 52 years.

On Friday, RSS changed social media photos and, the publicity department of the organisation said the workers were actively participating in the Har Ghar Tiranga campaign. RSS also posted a compilation of videos of Mohan Bhagwat and other RSS leaders hoisting the National Flag on Saturday.