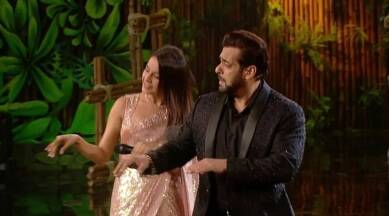 Shehnaaz Gill, who won Bigg Boss 13, is reportedly set to make her big Bollywood debut in Salman Khan's Kabhi Eid Kabhi Diwali. Salman is also alleged to have given her complete autonomy over her f...

Fans of Shehnaaz Gill are overjoyed since the actress is going to make her big Bollywood debut. According to reports, the Bigg Boss 13 star would appear in Salman Khan’s Kabhi Eid Kabhi Diwali. In the film, the actor-singer is rumoured to be cast opposite Aayush Sharma. While little is known about the character or screen time, Shehnaaz is claimed to be thrilled to be working alongside Salman Khan.

As readers may recall, Salman was blown away by Shehnaaz during her time on Bigg Boss 13. When they first met on stage, she introduced herself as ‘Punjab ki Katrina Kaif,’ and the presenter couldn’t help but giggle at her antics. He seems to have acquired a soft spot for her throughout the season, as he was always on the lookout for her. Even when she was having a panic attack in the house, he came into the show to help her. Salman had been a rock for his family and even Shehnaaz after Sidharth Shukla’s death. Salman was seen encouraging Shehnaaz when she returned to the Bigg Boss 15 platform.

Pooja Hegde will act alongside Salman Khan in Kabhi Eid Kabhi Diwali. In addition to Aayush Sharma, Zaheer Iqbal will play an important role. According to insiders, Sajid Nadiadwala has dropped out of the project, and the film will now be produced by Salman Khan Films. Salman may even direct the picture, according to rumours. The workers will begin working on the flooring in Karjat next week.