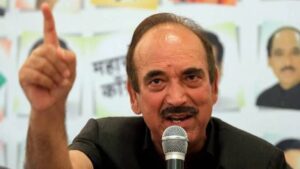 Former Congress leader Ghulam Nabi Azad is preparing to launch his own party, with the first unit set to open in Jammu and Kashmir within a fortnight, according to his close confidant GM Saroori.Mr Saroori stated that the party’s manifesto will include the restoration of Jammu and Kashmir’s pre-August 5, 2019 position. Former minister Mr. […]