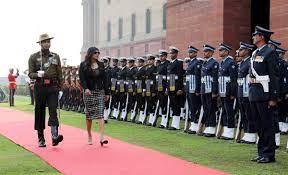 After being greeted by his Indian counterpart in New Delhi on Monday, French Minister for the Armed Forces Sebastien Lecornu was awarded the Guard of Honour.

After being greeted by his Indian counterpart in New Delhi on Monday, French Minister for the Armed Forces Sebastien Lecornu was awarded the Guard of Honour.

Lecornu also lay a wreath at the National War Memorial today, as he began his tour in Delhi.

“As he begins the #Delhi leg of his visit, French Minister for the Armed Forces @SebLecornu lays a wreath and pays tribute to India’s valiant soldiers at #NationalWarMemorial,” French envoy to India Emmanuel Lenain tweeted.

Rajnath Singh will co-chair the 4th India-France Annual Defence Dialogue with the Minister of Armed Forces of the French Republic during his visit to India.

According to the Defence Ministry statement, the visiting French Minister shall also meet External Affairs Minister S Jaishankar and the National Security Advisor Ajit Doval. This is the first visit of Sebastien Lecornu as French Minister of Armed Forces to India.

“In #Kochi, French Min @SebLecornu visits #IACVikrant. He praised India on joining the club of nations capable of building aircraft carriers & highlighted the central role of France-India naval cooperation in France’s strategy for the #IndoPacific,” envoy Lenain tweeted on Sunday.

According to Defence Ministry, India and France have close and friendly relations. In 1998, the two countries entered into Strategic Partnership, marking convergence of their views on a range of international issues apart from a close and growing bilateral relationship.

India and France are partners in defence and armaments, contributing to India’s policy of strategic autonomy in the defence sector through numerous industrial cooperation.