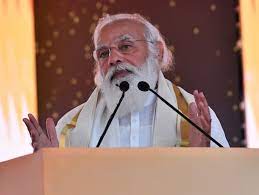 Prime Minister Narendra Modi will lay the foundation for Kochi Metro Phase 2 on September 1 at 6 p.m., Kochi Metro Rail Limited (KMRL) announced on Wednesday.
On September 1 and 2, the Prime Minister will visit Karnataka and Kerala to commission the first indigenous aircraft carrier INS Vikrant at Cochin Shipyard Limited in Kochi, as well as to inaugurate and lay the foundation stone for projects worth around Rs 3,800 crores in Mangaluru.

The newly proposed Phase 2 corridor of Kochi Metro will consist of 11 stations from JLN Stadium Metro Station to Infopark, Kakkanad. The new section will cover a distance of 11.2 km.

Whereas, the project Phase 1A will cover a distance of at least 27 km with 24 stations.

It is the first section of the project from SN Junction to Vadakkekotta and also the first strech of the work undertaken by the Kochi Metro Rail Limited (KMRL).

The work on Vadakkekotta, SN Junction stations and Panamkutty bridge began on October 16, 2019, which is also continuing amid the COVID-19 pandemic.

Vadakkekotta station is one of the largest metro stations with an area of ​​4.3 lakh square feet, reflecting the theme of Kerala’s role in the freedom struggle. It is different from other metro stations as it has large commercial spaces with new facilities built both inside and outside. Whereas SN Junction station has been based on the characteristics of Ayurveda and its modern methods.

With the opening of SN Junction and Vadakkekotta stations for revenue handling, KMRL is expected to touch an average of one lakh passengers per day.