WASHPAP: One Shared World presents a session on ‘Water and Sanitation for all: The fight against pandemics’ 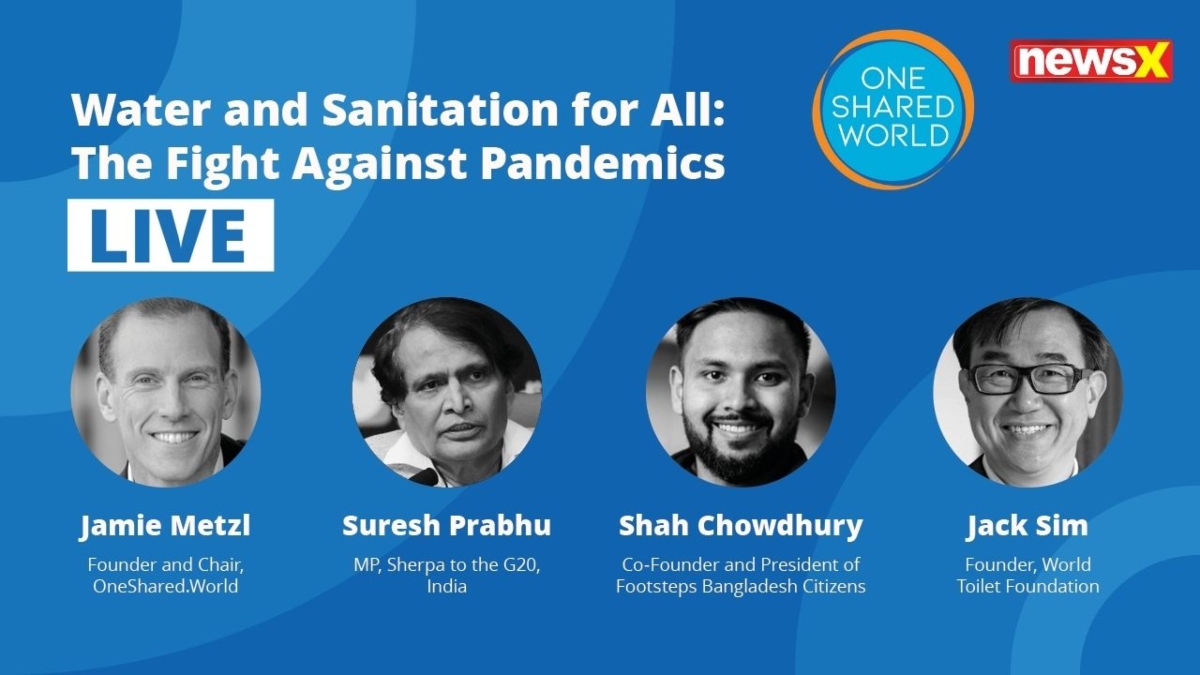 On the occasion of World Water Day on March 22, One Shared World presented a special session on water conservation and sanitisation for all. Titled as 'Water and Sanitation For All-The fight agains...

One Shared World, on the occasion of World Water Day on March 22, presented a captivating session titled WASHPAP on ”Water and sanitation for all: The fight against pandemics.” The session witnessed lawmakers, activists, and leaders from different countries and backgrounds come together at a single platform to address several issues that are prevalent in the world today and pledged towards working on a solution.

Jamie Metzl, founder and Chair  of ‘One Shared World’, Suresh Prabhu, Member of Parliament, Shah Chaudhary, President of Footsteps, Bangladesh and Jack Sim, founder of World Toilet Organisation joined the panel. In his opening statement, Jamie Metzl shared the vision of One Shared World and said, ”This is a part of our ‘rise and fall together’ speaker series, where we are exploring not just the great challenges of this moment but also how we can come together as a world to solve these issues”.

He further talked about how the organisation as a whole currently stands at a civilisational-turning point somewhat equivalent to 1918, ”One path forward is the path of exclusion, i.e wall building while the other is of inclusion i.e building bridges, only that second path can allow your species and all of us to thrive. that’s what we at One Shared World and the communities within it is all about,’ he added.

Formed in the earlier days of the pandemic, One Shared World initially aimed at solving issues of the pandemic but later realised that there are these the broader issues, which might have led to a pandemic situation like this. The organisation now aims at building a new framework for global collaboration and problem-solving. It also focuses on the importance of inter-dependence and how this approach can bring the communities together to tackle a global problem that affects people of each and every country in the world.

Talking about the need to have a global approach to solve these pressing issues, Jamie asserted, ‘Addressing the urgent needs of the world’s most vulnerable populations is not and can not be seen as just charity. It can not be seen as wealthier people helping the poor people. That’s not the right framework. Rather, it must be seen as it is and the best we can do is come together for building a safer world for everyone”.

Explaining the term WASHPAP, Jamie said that the word is a compound acronym connecting – Wash, Water, Sanitation and Hygiene, where PAP stands for Essential protection, and WASHPAP as a whole is described as an initiative that can be a smart investment to protect our planet from the pandemic and eliminate the possibilities of any future pandemics which may occur. WASHPAP campaign is focused on addressing the issue at every level. An outline plan has been developed by One Shared World where the target is to provide access to sanitation and pure drinking water to as many communities and countries as possible by the year 2030. The campaign #ShareTheWater has been actively running on social media platforms to educate, empower and encourage people to play their part.

Suresh Prabhu, Member of Parliament, former minister for Commerce and the current leader, sherpa of the G20 Summit  joined in the conversation as a guest speaker and spoke about the contributions made by his government and the current initiatives that are being undertaken by Prime Minister Narendra Modi. He talked about several policies that have been brought under Mr. Modi’s leadership in the past several years which focus on sanitation, drinking water as well as different policies that have been implemented in India which are directed towards educating people and providing them with the necessary resources. When asked about the G20 summit, Mr. Suresh stated, ”We are at the final stage of ensuring the agenda that will be discussed at the G20 summit this year, We the G20 constitutes of 86% of the population, it doesn’t give us power rather it puts us at a position of responsibility and accountability. being a strong nation means, it has to take care of those who are vulnerable.”

Mr. Shah Chaudhary, President of Footsteps, an organisation based out of Bangladesh, further pressed on the need to address the sanitisation issue in Bangladesh. He said, ”Access to Sanitation is a very big issue in Bangladesh, especially in the coastal region. With more refugees coming in from Myanmar, the problem has increased further and this is what the latrine project is trying to address. Our goal is to build various sanitation facilities along the entire coastal belt of Bangladesh so that everyone can be benefitted from this project”.

Mr. Shah has been administering sanitation facilities in certain areas of Bangladesh, especially at the refugee camps to ensure that water, sanitation, and healthcare facilities could be provided to those people residing alongside border areas. His initiative called ‘The Latrine Project’ aims to build over 500 sanitation systems along the coastal belt. currently, around 200 families are benefitting from the project.

Mr. Jack Sim, founder of  World Toilet Organisation, further shared his experience of how he left his business twenty years ago to work as a volunteer in several organisations. With his venture, he is only not solve the issues at an individual level but has also created a platform for different cultures to come forward and be a part of the solution. ”I was troubled when the organisation that I was working in used to call sanitation problem a water agenda. I said we have to decouple it and give sanitation its own centre stage for it to be addressed as a separate issue. The media publishes our work and through its viewership, we are now connected to 2-3 billion people across the world,” Mr. Zack stated.