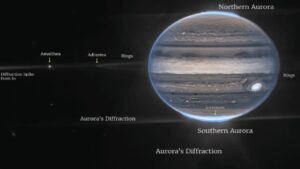 The largest and most powerful space telescope in the world has unveiled previously unseen pictures of Jupiter. In July, the James Webb Space Telescope (JWST) captured images of the Solar System’s largest planet. The photographs depict auroras, massive storms, moons, and rings around Jupiter in stunning clarity, according to experts. The infrared photos were artificially […]