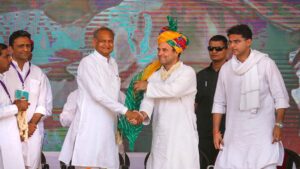 With Sonia Gandhi unwilling to return as Congress president for another term due to her health, and son Rahul Gandhi likewise hesitant, a non-Gandhi might be considered for this position, which has not happened in the 23 years since Sonia Gandhi became Congress president in 1998. Senior politician Rajasthan Chief Minister Ashok Gehlot has been […]