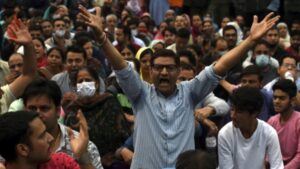 A group of Kashmiri Hindus protested on Wednesday in the Budgam area of Jammu and Kashmir in response to the Tuesday assassination of a member of their community. A Kashmiri Pandit named Sunil Kumar, was shot by militants on Tuesday in Shopian, where he lost his life, and his brother Pintu Kumar suffered injuries. In […]