BJP protest: Amid all the political turmoil in Bihar, BJP is staging a mega protest with all the senior leaders at the party headquarters in Bihar. Seasoned Ministers have come together to stage a protest against Nitish Kumar, slogans like Nitish Kumar Haye Haye are echoing the Bihar Headquarters of Bhartiya Janta Party. Sanjay Jaiswal […] 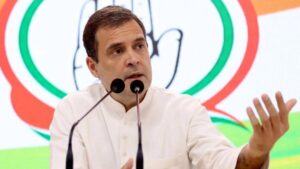 Rahul Gandhi in a press conference in Delhi said the nation is under dictatorship, and democracy is dead. Amid the National Herald case, under which allegedly party leader Rahul Gandhi and Sonia Gandhi are suspected of money laundering. Congress Party workers have begun gathering at the party office, ahead of their nationwide protest against high […]