Three people were detained on Tuesday for reportedly stabbing a young man near Shivamogga’s Gandhi Bazar neighbourhood on August 15. According to Additional Director General of Police (ADGP) Alok Kumar, four suspects in the event have been identified, and a complaint has been filed under Section 307 of the Indian Penal Code in connection with […] 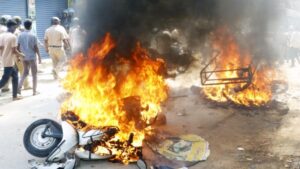