According to authorities on Saturday, Jharkhand Crime Investigation Department has submitted a chargesheet against 11 identified suspects in the case involving police shootings during the Ranchi unrest. 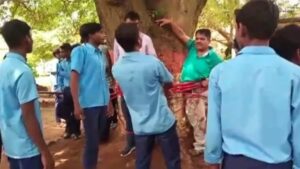 In the Dumka region of Jharkhand, a group of students allegedly beat up and tied their teacher to a tree after they gave students low test results that caused them to fail. Jharkhand Police ADP on Tuesday announced the formation of a special investigation team (SIT) to look into the barbaric assassination of Dumka Class 12 girl Ankita on August 23 by a youngster who was tormenting her for declining his proposal and eventually burned her alive. “The SIT led by the Superintendent of Police has been […]

The BJP has claimed that women are no longer “safe” in Jharkhand, and has questioned why Chief Minister Hemant Soren has stayed silent on the death of a Class 12 student who was reportedly set on fire by a man. The saffron party officials, including Jharkhand state ministers Raghubar Das and Babulal Marandi, asked that […] According to Raj Bhavan sources, the Election Commission of India (ECI) has recommended that Jharkhand Chief Minister Hemant Soren be disqualified as an MLA. The EC has responded to Jharkhand governor Ramesh Bais’ request for its opinion on a complaint received by the opposition BJP that the CM must be qualified because he allegedly holds […] 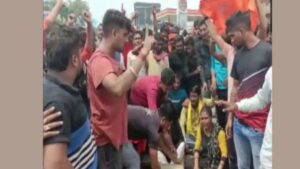 A 19-year-old woman from Jharkhand’s Dumka district died of her injuries in the early hours of Sunday after being set on fire by a man harassing her on Tuesday. Her death sparked protests in Dumka by the Vishwa Hindu Parishad and the Bajrang Dal, which resulted in prohibitory orders. According to police, Shahrukh Hussain, 19, […] 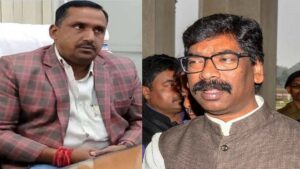 As the Jharkhand government faces political turmoil, state Health Minister Banna Gupta in the Hemant Soren-led government dared the BJP-led Centre to impose President’s rule in the state on Sunday. Banna Gupta also claimed that a “pre-planned conspiracy” to destabilise the state government was underway. His statement comes as MLAs from the ruling coalition arrived […] 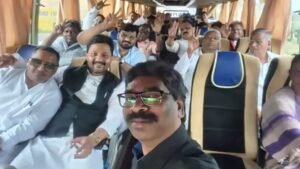 Faced with the prospect of being disqualified from the assembly, Jharkhand Chief Minister Hemant Soren and his ally Congress are shifting their MLAs, a common strategy for avoiding attempts to poach lawmakers and bring down governments.Mr Soren and the MLAs were seen getting on buses with luggage and leaving after a meeting at the Chief […]